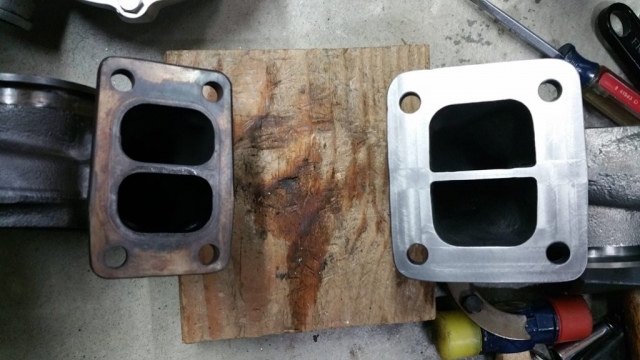 I researched filtration for ethanol systems and am pretty sure the fuel filter isn’t ethanol-capable – never dawned on me that it wouldn’t be since it’s a paper element. An Injector Dynamics article on filtration was pretty helpful and noted that “…6 and 12 micron microglass, ethanol-compatible fuel filters did well in our testing and are recommended”, so a Fuelab 6-micron microglass unit will be added. Hard not to wonder if this was at the bottom of it all – don’t want to think about it.

On a related note, the fuel pressure regulator is also suspect for the same reason. I bought it about 5-6 years ago used and who knows how old it was then. The concern is that E85-compatible aftermarket parts didn’t really start hitting the market until maybe after this one was manufactured. As a precaution, a known-compliant regulator will be used.

In other news, during the collapsing intake fiasco an engineer deep within Garrett offered to help out. He noted that the engine would gain performance and lower boost (lessening the risk of detonation) by going with a larger 1.06 A/R turbine housing over the existing 0.83 housing. His recommendation was noted but put aside after the scoop failure was found. Now, with moving the turbo closer to the exhaust ports, a new exhaust manifold is needed. Because turbo merge collectors can be tricky to make with thick-wall pipe, I wanted to use a cast stainless collector. Turns out that it’s hard to find divided ones for T3 housings housings but they’re widely available in the larger T4 frame, so the switch was made. The idea is that the less-restrictive housing will offset the larger A/R (0.83 A/R isn’t available), and that by keeping it divided, lag won’t be increased.